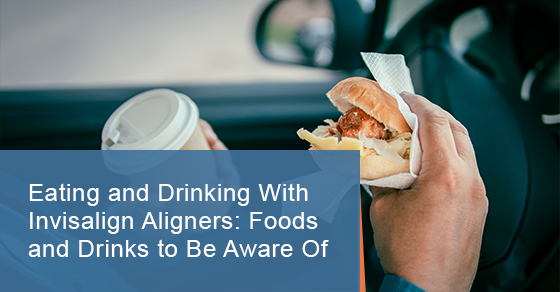 Invisalign is a type of aligner that orthodontists use to help straighten teeth. They’ve recently seen a boom in popularity as a discrete alternative to braces.

When patients choose between the two, one common question we hear is, “What foods do I have to stop eating?”

Traditional train-track braces have brackets and wires that are prone to breaking. To make a long list short, there are many foods you should avoid. On the other hand, there’s Invisalign. Aligner trays are completely removable, so you can continue enjoying your favourite foods.

However, sometimes patients forget to take them out or are tempted to snack while wearing their aligners. Unfortunately, the clear resin that makes Invisalign practically undetectable can become stained or discoloured if you eat with them in.

As well, certain foods can change the way your aligners fit, thus extending the length of your treatment.

At Bloor West Smiles, our team has the knowledge to protect your investment while letting you enjoy your favourite foods and drinks. Here’s everything you need to know about caring for your Invisalign aligners while eating and drinking.

Foods and Drinks to Avoid

As a general rule for aligners, you don’t have to eliminate any foods as long as you take out your aligners beforehand. Accidents happen, though, and some foods can interfere with Invisalign treatment if you eat them too often.

Check out the worst offenders below.

Sticky or chewy foods like candy or jerky are a no-no for braces because they latch on to brackets and wires. So, why avoid them when wearing Invisalign?

Sticky foods are exceptionally good at latching onto teeth and the gumline. Aligners create a tight seal that will trap bacteria from leftover foods and promote tooth decay. Unless you plan on brushing your teeth after every stick of gum, look for other ways to freshen your breath. Sugar-free gum is a great alternative.

Invisalign is not designed to withstand the pressure of chewing, so you can damage the trays if you wear them while eating. Crunchy or hard foods will only make the damage more severe.

Eating with aligners on is not the best idea, but your dentist may want you to avoid crunchy foods altogether if you have attachments.

Attachments are small “bumps” that we sometimes put on teeth during Invisalign treatment to act as anchors. Hard foods like nuts, pizza crusts, and even apples can sometimes knock the attachments off.

Attachments can be replaced easily, but why go through the trouble?

Foods and Beverages That Cause Staining

You should be aware of what foods and drinks cause staining if you’d like a whiter smile. Our pearly whites become a brownish-yellow over time when things like coffee, red wine, or cola are consumed often.

However, is there any harm in a quick drink while wearing your aligners?

It likely won’t change the effectiveness of your trays when it comes to straightening, but your Invasilign will start looking a lot more visible. Clear-looking trays are super-important to most patients because they don’t want their Invisalign to be noticeable.

For those who have attachments on their teeth, once they’re removed, you’ll likely see that the area underneath them is much whiter.

If you don’t want to give up wine or coffee completely, ask us about whitening when your treatment is complete. Keep in mind, however, that it’s not just drinking that causes staining; eating certain foods does too. Here are five common teeth stainers:

The plastic used to make Invisalign trays is very thin. This is what gives them their low-profile look, but it also makes them vulnerable to heat damage. It doesn’t take much heat either.

Even a cup of tea is hot enough to warp the material and thus lengthen your treatment.

Slowly sipping on drinks is also a no-no for aligners because you should be wearing them for at least 20-22 hours per day. It can be hard to reach those numbers when nursing drinks.

It’s not just hot beverages you need to be mindful of. Sipping on slushies, frappuccinos, and iced tea can also stop you from hitting your daily-wear numbers. Try sticking to drinks that are room temperature.

Now that you know what foods and drinks to avoid, let’s look at three eating and drinking rules to care for your aligners.

1. Take your aligners out before eating

We’ve said it before, but it’s worth repeating: take your Invisalign out before you eat!

Leaving your trays in can be tempting (especially when you’re out), but you risk damage, discolouration, and doubling up on your treatment time if you do.

2. Only drink water with your aligners in

Plain water is the only drink that won’t stain your teeth or Invisalign while you wear them.

It’s also the best hydrator and is sugar-free, so you can quench your thirst without having to brush or floss afterward.

3. Don’t forget to brush and floss after eating

Just to be clear, flossing and brushing after each meal is recommended for everyone, but even more for patients with Invisalign.

Bacteria from food debris is snugly trapped between your teeth and trays when you pop your aligners back on without brushing. This is the perfect environment for plaque and bacteria to grow, so make brushing and flossing after eating a habit.

Book With Us at Bloor West Smiles

Ready to book? We handle all of your Invisalign concerns right here at our family dental practice in Toronto! For more information, call Bloor West Smiles at 647-371-1407 or click here to book an appointment.

Trust Your Teeth To Experience & Get A Healthy Smile Today!

Please fill out the form below and our front desk will be in touch shortly.